Welcome to the Community!

What are Data Collectors?

The Canary Data Collectors are not licensed and all Collectors are included with the purchase of the Canary System.  However, Collectors do need to be installed individually using the Canary Installer. By choosing not to license individual data collectors, it is easier to follow best practice architectures and ensure robust solutions.

The Canary Sender and the Receiver are the main components that work together to provide SaF technology, accomplishing the following:

The Sender is capable of supporting User Authentication and requires the user credentials before connecting to a Sender. The Canary System administrator can determine, from within the Sender Service, which users are granted access. The advantage of user authentication is that no bad actors can jeopardize your operation.

The Sender API supports three session settings of packet size, zip, and delay for conserving network resources.  'Packet Size' prevents data from being sent in huge bursts or batches, by limiting the amount of bytes that can be sent at once. The 'Packet Delay' determines how often data packets are sent across the network to the historian. The packet size and delay settings work in tandem to form the 'data throttle' that controls total network resource consumption. Finally, the 'Packet Zip' can be configured to prevent the historian from zipping the file, which saves some storage space at the cost of decreasing network performance.

Packet settings are not configurable within all Data Collectors but is available in the Sender API SDK.

Inserting data is supported by the CSV, MQTT, and SQL Data Collectors as well as available in the Sender API SDK. For best performance, it is best to send data to the historian in chronological order.

The Sender is capable of supporting dual logging. The advantage of dual logging is that data from a single Logging Session can be sent simultaneously to multiple historians.

Typically this is configured by adding a second or third historian to the Logging Session, using a comma and space as separators (e.g., HistorianOne, HistorianTwo).

The Canary System is comprised of components that are pre-integrated to assist in the collection, storage, and reporting of data.

In its simplest form, the Canary System can be broken down into the following components, Data Collectors, Sender, Receiver, Canary Historian, and Views.

The Canary Data Collectors and Sender work in tandem to log data from the data source and push that data to the Receiver.  Each Collector/Sender can be configured to push data to multiple Receivers.  The connection between Sender and Receiver is equipped with Store and Forward enabling local data buffering as necessary.

The Receiver is always installed local to the Canary Historian and writes received values into the archive.

The Views serves as the gatekeeper for client data queries, retrieving necessary data from the Canary Historian, performing any aggregated data requests, and then publishing that data to the client tool, whether a Canary tool, API, or third-party solution.

Most components can be installed individually and provide for flexible system architectures.  However, a series of best practices is recommended to follow whenever possible.

Whenever possible, keep the Canary Data Collector and Sender components local to the data source.

Install both the appropriate Data Collector as well as the Canary Sender on the same machine as the OPC server, MQTT broker, SCADA server, or other data collection source.

The benefits of this architecture are based on the Sender's ability to buffer data to local disk should connection to the Receiver and Historian be unavailable.  This protects from data loss during both network outages as well as both historian server and Canary System patches and version upgrades.

Both the Sender and Receiver have security settings that can be configured with Active Directory to require user authentication and authorization prior to accepting and transmitting data and only require a single port to be open in the firewall.

Should the value of the organization's data not be as important, the Data Collector and Sender could be installed remote from the data source on an independent machine or on the same server as the Receiver and Canary Historian itself.  This form of 'remote' data collection will still work without issue except in the event of a network outage or other cause of unavailability of the historian. The option of buffering data will be unavailable.

Data from multiple data sources can be sent to the same Canary Historian.  To accomplish this create unique Data Collector and Sender pairings as local to each data source as possible.  The type of data source can vary (OPC DA or UA, MQTT, SQL, CSV, etc) but the architecture will stay the same. 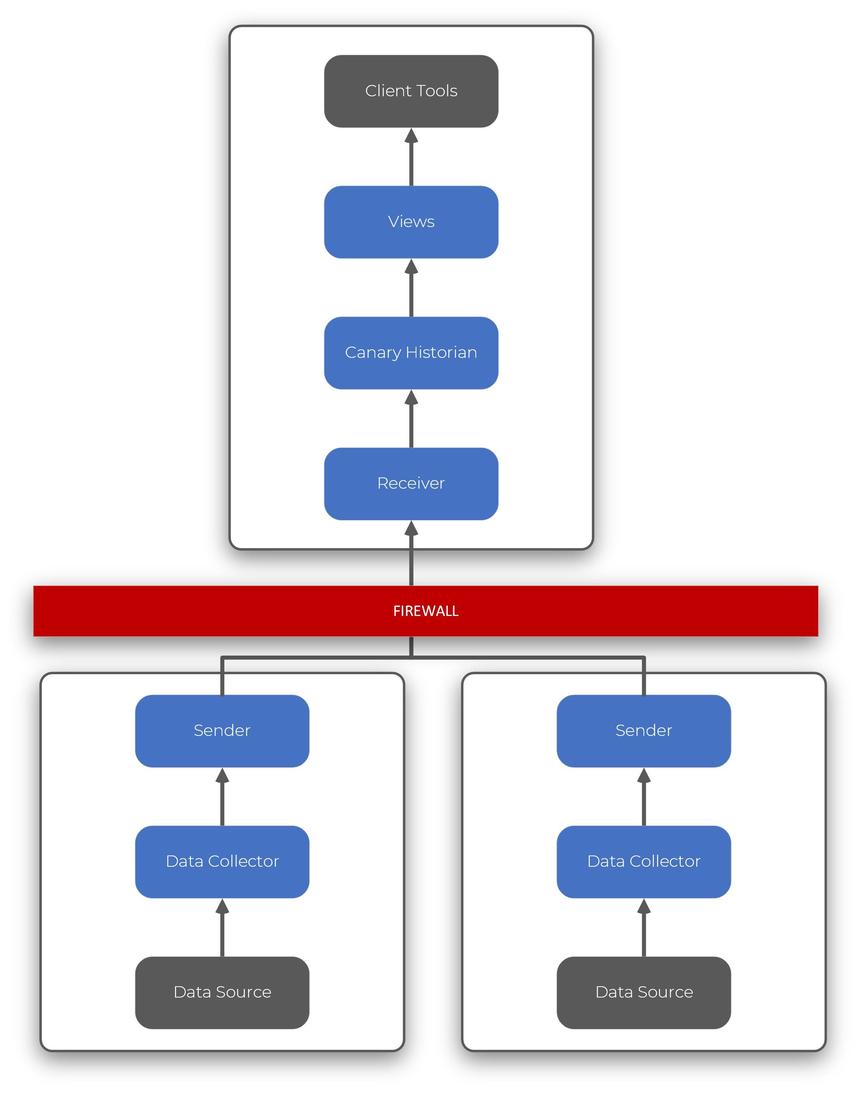 The Receiver moderates which data is logged to the Canary Historian using the tag name, timestamp, value, and quality; all of which are communicated from the Sender. In doing so, it monitors each individual tag, only allowing a single unique value and quality per timestamp.

This feature provides simplistic dual logging as the Receiver follows a 'first in wins' methodology.  Simply put, redundantly logging the same information from multiple Sender sessions will result in the Canary Receiver keeping the first entry while discarding any and all duplicate entries. 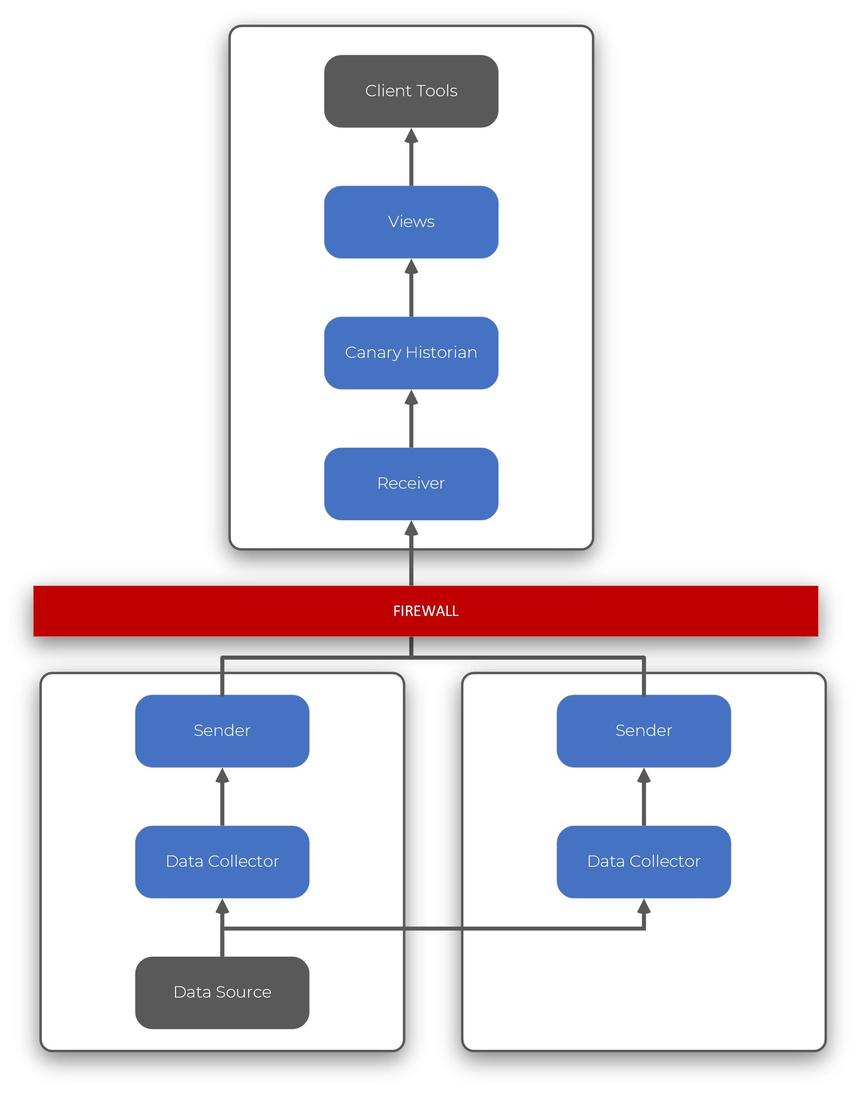 To use this feature for redundant data logging, simply create two separate Canary Data Collector and Sender sessions. Architectures can vary as you may choose to duplicate the data server (OPC server, SCADA instance, MQTT broker, etc) shifting the point of failure to the device level.  Or you can simply create a separate Data Collector and Sender session that is remote to the data source in which case the data source or server becomes an additional failure point to the device.

Each Sender has the ability to be configured to push data in real-time to multiple Receiver and Canary Historian locations enabling redundancy.  This is configured within the Data Collector with the configuration slightly varying depending on the collector type.  Generally however, this is accomplished by listing multiple historians in the 'Historian' field, separated with a comma. 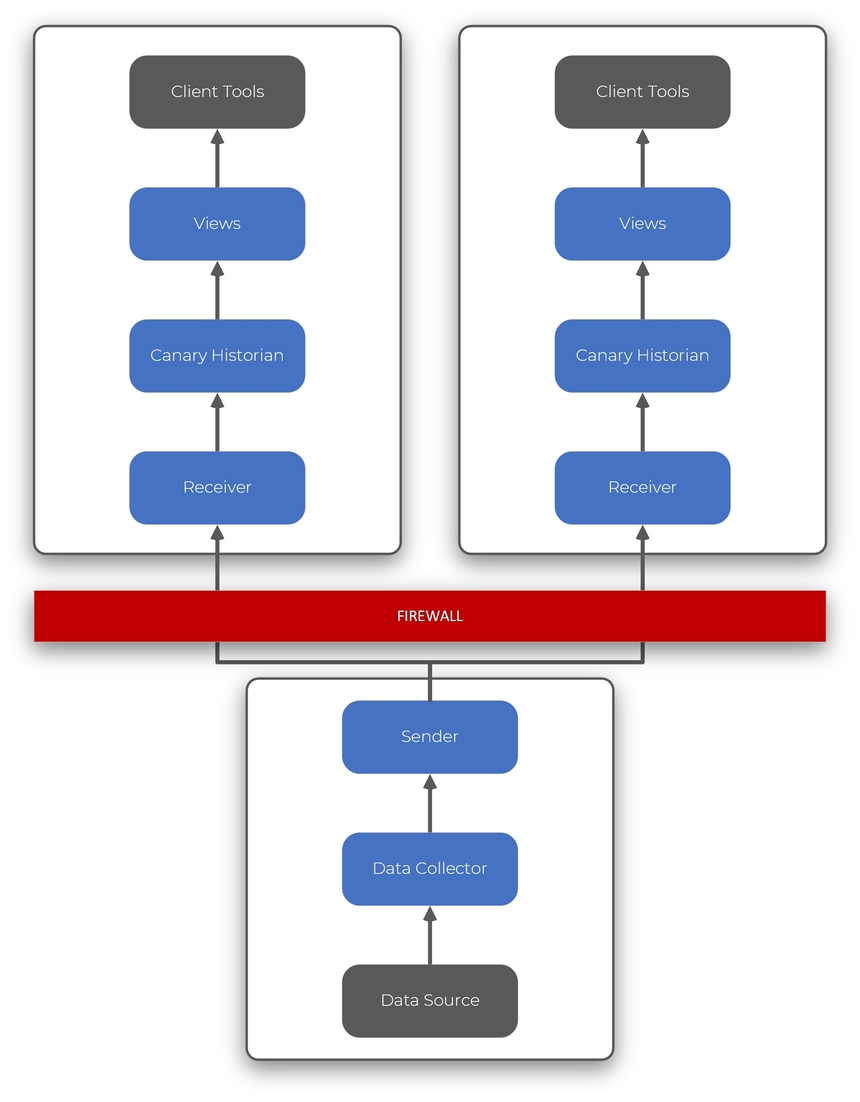 This dual logging approach is recommended when redundant historical records are desired and insures that a real-time record is provided to both historian instances.  Multiple data sources can be used as demonstrated in previous architectures.  Each data source would need to have the Data Collector configured to push data to all desired Canary Historian instances.

Proxy Servers and Logging Across DMZs

A Canary Proxy Server may also be implemented in logging architectures.  This feature provides a Receiver packaged with another Sender, and would be installed to serve as a 'data stream repeater', often useful in DMZ or strict unidirectional data flows. 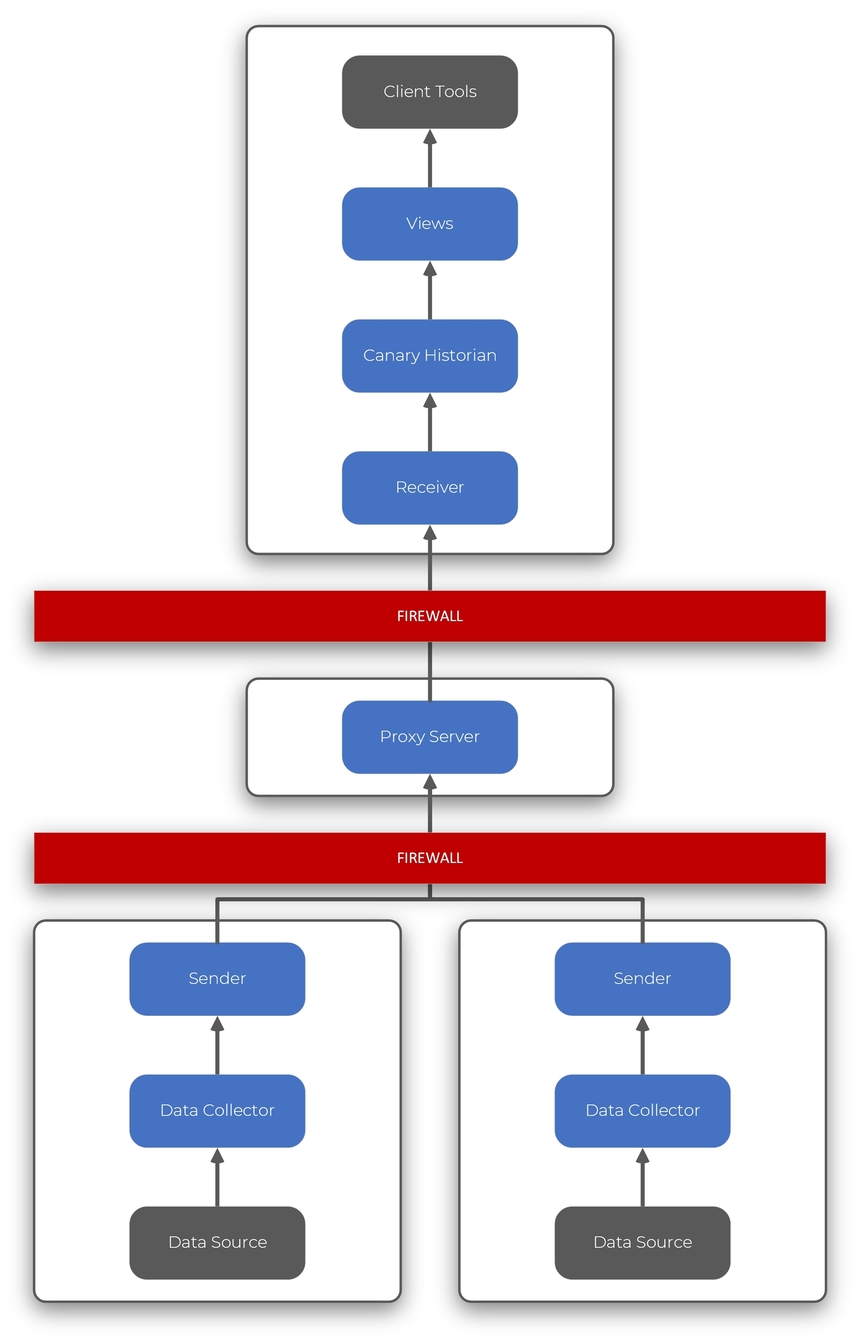 Sitting between two firewalls, the Proxy Server is comprised of a Receiver that manages the incoming data stream from the remote Sender and Data Collector sessions.  The Proxy Server Receiver is also paired with an outbound Sender session that can relay the data stream to another Receiver, in this case a level above the Proxy Server and through an additional firewall.  Like all Sender and Receiver configurations, this only requires a single open firewall port for all data transfer and ensures no 'top-down' communication can occur.

Data logging can easily be accomplished to 'cloud' or 'hosted' Canary Historian instances.  Again, this is accomplished by simply configuring the Data Collector and Sender sessions to include the IP address and security configurations necessary to reach the remote historian. 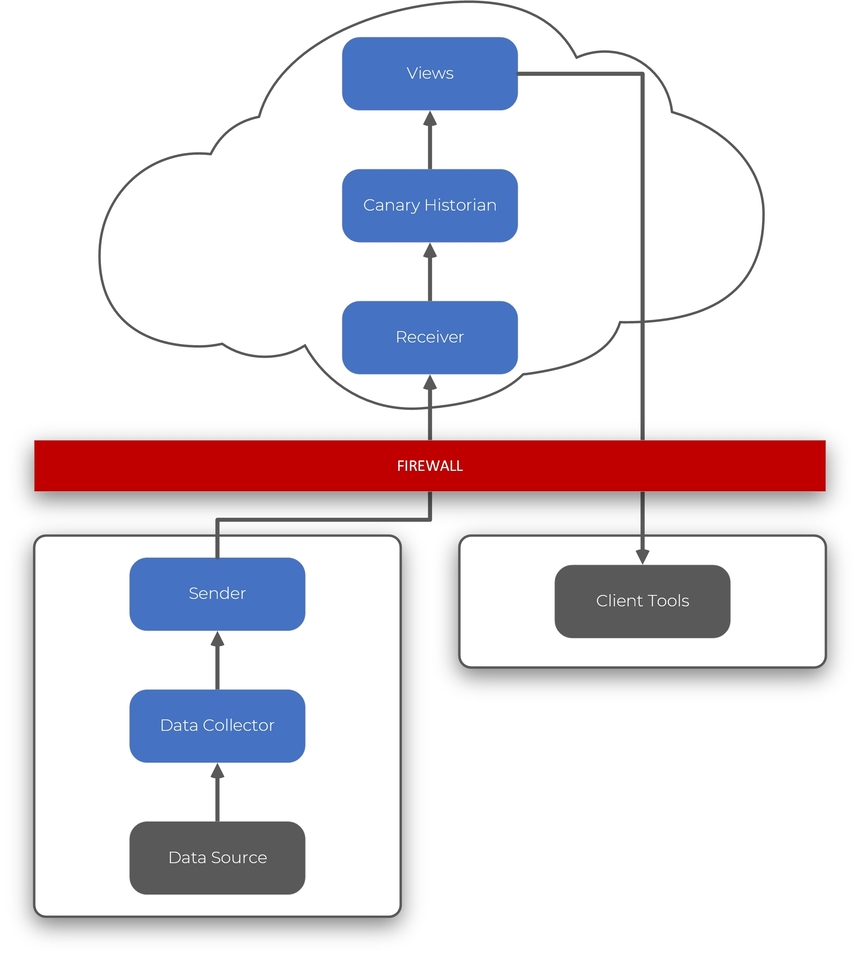 Should a local historian also need to be added to the architecture, add an additional historian instance to the Data Collector configuration and you will begin pushing data in real time to both a local Canary Historian as well as the cloud installation.